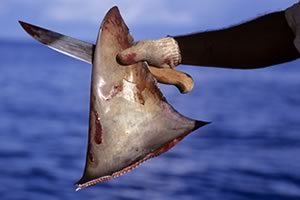 Fins are hacked off of live sharks in a wasteful process called "finning" to make shark fin soup.
© Photography by Jeff Rotman

Support Our Shark Campaign
Over 100 million sharks are slaughtered annually, at a rate of over 270, 000 per day. This all to fuel the shark fin trade market for shark fin soup. Shark fin soup is a delicacy in some Asian cultures. The soup can fetch up to several hundred U.S. dollars per bowl. Some fins can fetch thousands of dollars depending on the rarity of the shark species as well as fin age and type.

Shark fins are harvested from the animals in a process called finning. The practice is wasteful, unsustainable and ecologically unsound. In the process of finning, sharks are caught on long-lines (literally, miles of line floating in the oceans affixed with hooks and bait), brought to the boat, their fins are hacked off, and the mutilated, but live animals are then thrown back in to the water where they die. The shark carcasses are discarded to make space on the boat for more fins since shark meat is not as profitable as fins.

Get your Tribal Shark Pendant when you Donate to support shark conservation research.

Shark populations are particularly vulnerable to this exploitation due to inherent life history characteristics which feature a pattern of slow growth, late maturity, long gestation, low reproductive output and long life, resulting in a slow rate of population increase. As a result, shark populations worldwide are drastically declining. In the Atlantic alone, shark populations have decreased between 60 and 90 percent depending on species, in just the last 15 years!

Our current Save the Blue SHARK campaign is to stop shark finning by
supporting cutting-edge shark research and education projects.

We currently support work being conducted by scientists across the globe that tackle the shark fin issue from several key angles including human health, shark forensics, education and fisheries. 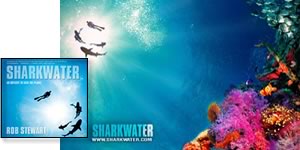 China is the largest consumer and trader of shark fins worldwide. In a recent survey, over 35% of urban Chinese reported consuming shark fin. In order to stop the demand for shark fin soup we urgently need to drastically raise awareness in China! The award winning documentary SharkWater by filmmaker Rob Stewart is an amazing film exposing the exploitation and corruption involving the shark fin trade. SAVE THE BLUE is supporting Rob Stewart & WildAid to create a Chinese version of SharkWater and distribute the documentary throughout China with the goal of reaching 100 million Chinese viewers. 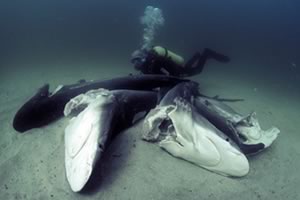 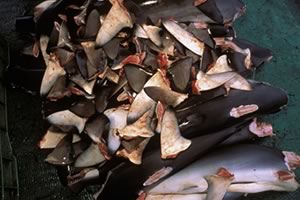 100 million sharks are slaughtered every year just for their fins. © Photography by Jeff Rotman

Shark fins are primarily consumed in Asian countries as a cultural sign of wealth thought to even be an aphrodisiac. However, University of Miami scientists Dr. Deborah Mash (Medical School), Dr. Larry Brand (Marine School/RSMAS) and Neil Hammerschlag (Marine School/RSMAS) are studying the presence of deadly neurotoxins in shark fins linked to prevalent and severe human neurodegenerative diseases, which as of yet have no cure. A discovery that the consumption of shark fins will cause a high risk of these severe human neurodegenerative diseases will help lower the demand for fins and slaughter of sharks.

It is almost imposible to identify disembodied shark fins based only on their appearance. This makes regulating the shark fin trade and preventing the illegal trade of shark fins impossible. Dr. Mahmood Shivji and scientists at the Nova Southeastern University Guy Harvey Research Institute are developing DNA-based forensic techniques and markers to rapidly identify shark carcasses, dried shark fins, and other products obtained from shark fisheries and fin markets. These forensic approaches are being used to help monitor and prevent the illegal trade of shark fins across the globe.

Many sharks are unintentionally caught on commercial fishing long-lines targeting tuna and/or swordfish. For example, between 1997 and 1998, 450, 000 blue sharks alone were taken by the tuna long-line fishery in New Zealand alone. Dr. Samuel Gruber of the Bimini Biological Field Station and Scientists from Shark Defense are developing both chemical and magnetic shark repellents. The goal of this research is to eventually create a repellent to put on commercial fishing gear to eliminate the unintentional catch of sharks.

Your donations to SAVE THE BLUE will support these and other projects aimed at protecting sharks and stopping shark finning.

So please donate and receive and wear your exclusive tribal shark pendant and know that you are helping to SAVE THE BLUE!!

On a recent afternoon aboard a research boat, Hammerschlag and his team from the University of Miami's Rosenstiel School of Marine and Atmospheric Science, found what they refer to as an "amazing" creature.

"Any day that you can see a shark is an amazing day," Hammerschlag said. "Sharks are in a lot of trouble. They need all the help they can get."

Hammerschlag studies the mythical sea creatures to discover how their ailments could be linked to the development of human diseases.

"The shark is sending us an SOS," he said as he traveled on a boat with his research team. "I'm attempting to draw blood."

It's an SOS about a health threat that not only affects sharks, but also affects man. His team has found links between the sharks and diseases that cripple and kill humans.

"Toxins that can give you Alzheimer's, dementia, ALS, Parkinson's. Pretty scary stuff," Hammerschlag said. Back on land, his partner Dr. Deborah Mash, a professor of Neurology for the Miller School of Medicine at the University of Miami, studies his findings inside a lab.

"This is a first. No one has seen this data," Mash said.

"Is there a footprint suggesting an SOS from the shark?" CBS4's Chief Investigative Reporter Michele Gillen asked.

"There is," Mash said. "He is an apex predator, as we are. He is going to mirror what we are doing to our bodies. The shark is giving us a mirror on what is coming into our diet. Showing us what is out there in our marine environment that can damage out bodies."

The journey for answers begins with a dizzying display of precision, which begins with the intubation of the shark so that oxygenated water pours through its gills. Then, the sharks are examined, biopsied, blown on and electronically tagged.

For scientists and students, this is a key moment - not only tagging the shark but evaluating the blood and stress levels of the shark, for research the world awaits.

What they found in the shark fin? The neurotoxin BMAA (short for B-Methylamino-L-alanine), which is produced by an algae known as cyanobacteria, often found in lakes, oceans and the soil.

"We were really surprised at the level of detection of this toxin BMAA in the shark fins," Mash said.

"We found it in all but three samples that we tested. I never expected that. That means that it is very prevalent in the shark diet," Mash said. "The results are staggering. I never predicted that we would see the incidence of this toxin in the large number of shark samples off the South Florida coastal waters."

When asked why this toxin is so dangerous, Mash said, "This toxin has been shown to damage neurons. Neurons are the primary building block of the brain."

SharksThe toxin, which has been shown to kill brain cells, has turned up - repeatedly - in Mash's studies of the human brain - particularly of the brains of victims of Alzheimer's, Parkinson and Lou Gehrig's patients.

"We are detecting BMAA in the brains of the patients that have donated them for research," Mash said. "That is why we are seeing linkage with Alzheimer's and with Lou Gehrig's disease."

If the shark holds clues to brain-based diseases that have the potential to affect everybody - it's even more chilling that the shark is threatened today because of a demand for soup made from its fin.

The soup is considered a delicacy and sign of prosperity in Asian cultures. But South Florida's team of scientific detectives are just publishing their work that suggests consumers might want to think twice before biting into a food that tradition says will bring them luck.

"If you consume shark fin products or you use this in your diet, yes, you are going to be exposed to increasing amounts of BMAA's," Mash said. "With repeat exposure throughout the life span, it could put someone at risk for a brain disorder like Alzheimer's and Lou Gehrig's disease."

All this is the first chapter of a medical mission aimed at unearthing clues that link man - the oceans top predator - and our survival.